As we reach another year since one of the most tragic and iconic days in US History, we’re reminded that the message that we need to unite and stand as one is more important than ever. We are all Americans regardless of Race, Religion, Sex or Political Views. This day brought fear and uncertainty but it also united us as a nation and marked a day we will NEVER forget!

The September 11, 2008 dawn breaks over the new Pentagon Memorial, which will be dedicated today in ceremonies attended by President George W. Bush, Vice President Dick Cheney, Secretary of Defense Robert M. Gates and Former Secretary of Defense Donald H. Rumsfeld as well as the senior leadership of the armed forces.. The memorial — the first of three national memorials to the 9-11 victims to be completed, contains 184 benches, one for each innocent victim of the Pentagon attack. DoD photo by R. D. Ward (Released) 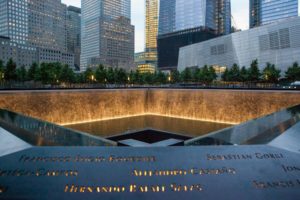 The attacks of September 11th were intended to break our spirit. Instead we have emerged stronger and more unified. We feel renewed devotion to the principles of political, economic and religious freedom, the rule of law and respect for human life. We are more determined than ever to live our lives in freedom.
Rudolph W. Giuliani. December 31, 2001

About the Author: admin